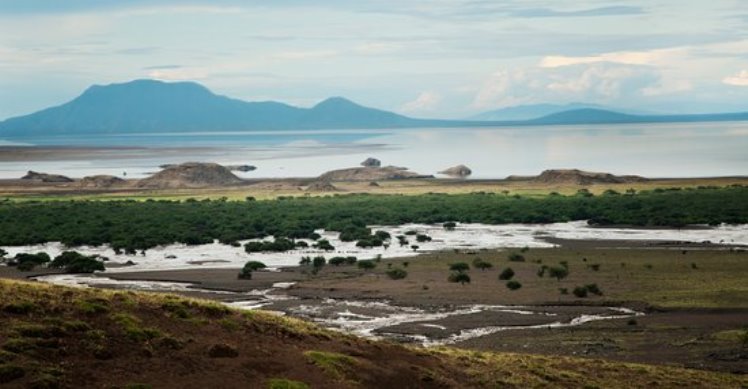 Lake Natron, a natural alkaline soda lake, is one of a series of the East Africa Rift Valley lakes, located in the Northern Tanzania, North of Ngorongoro Highlands and South of the active volcano Mt.OlDonyo Lengai. The Lake measuring a maximum of 57 Kms in length, is quite shallow, less than 3 m deep, and varies in width depending on its water level. It is known as a soda lake due to its exceptionally high concentration of Sodium Carbonate; temperatures of mud can reach up to 50°C and alkaline levels can reach a ph10

The Lake’s edges are dotted in a pink tinge created by the thousands of flamingos that migrate there. The pink colour is the result of the billions of Halophiles bacteria, their presence makes the lake ideal for flamingos and it is these bacteria that give the birds their magnificent pink colour. They are some of the only creatures who can thrive in these conditions, the caustic environment actually acting as a barrier against predators.

One of the most original landscapes in East Africa, this area is breathtakingly beautiful!

The fringe of the valley is composed of emerald green hills and mountains that create scenery unrivalled anywhere else in the world. Spectacular flocks of flamingos are one of the major attractions for visiting the lake. It is here where the lesser flamingos nest successfully. Over three quarter of the world’s population of this bird, breeds here because food is plentiful, nesting sites abound and because the lake exists in almost total isolation, free from outside disturbance.

The NgareSero River provides a surprising contrast to the heat and dust, as it flows clean and cool out of the Rift Valley wall into Lake Natron. Among this naturally pristine spectacle also sits Mt.Oldonyo Lengai, the world’s only active Sodium Carbonate Volcano! At 3450 m, this impressive peak is well-regarded by the Maasai as the sacred “Mountain of God”. A nearly perfect cone, it still erupts occasionally. The area is also home to the nomadic Maasai who maintain their traditional lifestyles, un-influenced by modern cultures.

This area is definitely for those who are looking for an adventurous safari. Activities here include walks around the lake and to the streams and waterfalls along the nearby escarpment, bird watching, cycling and trekking up Mt. Oldonyo Lengai. A challenging hike to the top of the “Mountain of God” offers an opportunity to view molten lava and from there you have great views of the surrounding landscapes.