Off The Beaten Track Safari

Safari During The Months of December to March & June  to October

Tanzania Under Canvas – Off The Beaten Track Safari

After early breakfast on this  day of safari  you will depart from Arusha to Arusha National Park.

On this day you will explore West Kilimanjaro (Also known as Amboseli South) with lunch being on your side you will get to see some huge tuskers that move up and down Amboseli National Park in Kenya .You will also get to see Gerenuk, Kudu, and Eland in this area. With luck you will get to see even lions and Cheetahs. Returning to camp for hot lunch then proceed for an afternoon game driver. Returning to camp late in the afternoon Later in the evening you will do a Night Game drive in this area.

On this  day of safari  you will depart from Chui Campsite , have a short game drive and  then proceed to the Longido.

Then proceed to Camp for hot lunch. After lunch you will then carefully walk through the Ngarasero River Gorge after walking carefully trough the gorge you will get to the Natural Jacuzzi!!!

It’s safe to swim at this water falls. Later return to camp for dinner and overnight

After early breakfast on this day of Safari you will depart from World View Campsite and proceed to Serengeti National Park, driving through a rough patch of road that will drive you up the Great Rift Valley, where you will get some fantastic view of Lake Natron and the Mountains below. The views from the view point are just fantastic.

Depending on the Month of Travel
From Mid – July to October

The great herds are in the North of Serengeti. Once you enter Serengeti National Park, from Klein’s gate you will then drive up North to Bologonja where you will meet up with the crew who would have set up the camp for you.

You have a good chance to see the River crossing in the area. You will spend 3 days in this area.

You will see lots of Cats in Central Serengeti. Dinner and overnight Seronera Wildlife Lodge.

On this  day of safari  you will  depart after breakfast early in the morning to Ngorongoro  Crater.

Do the  crater  tour till  late afternoon then assent the  crater  and proceed to Savanna Bush Camp  for dinner and overnight.

On this  day of safari  you will do Canopy walk in Lake Manyara National Park. Then explore the  Park  for its predators and prey.

Returning to Savanna Bush Campo for dinner and overnight.

On this day of safari you will be our guests!! You will do Zipline adventure at Mto WaMbu.

Then in the afternoon you will do a cultural program. Returning to Savanna Bush Camp for dinner and overnight.

On this  day of safari you will depart from Savanna Bush Camp  to Tarangire National Park (The Garden of Elephants ). You will explore the park for its gentle giants  till late afternoon  then exit the park and proceed to Arusha . 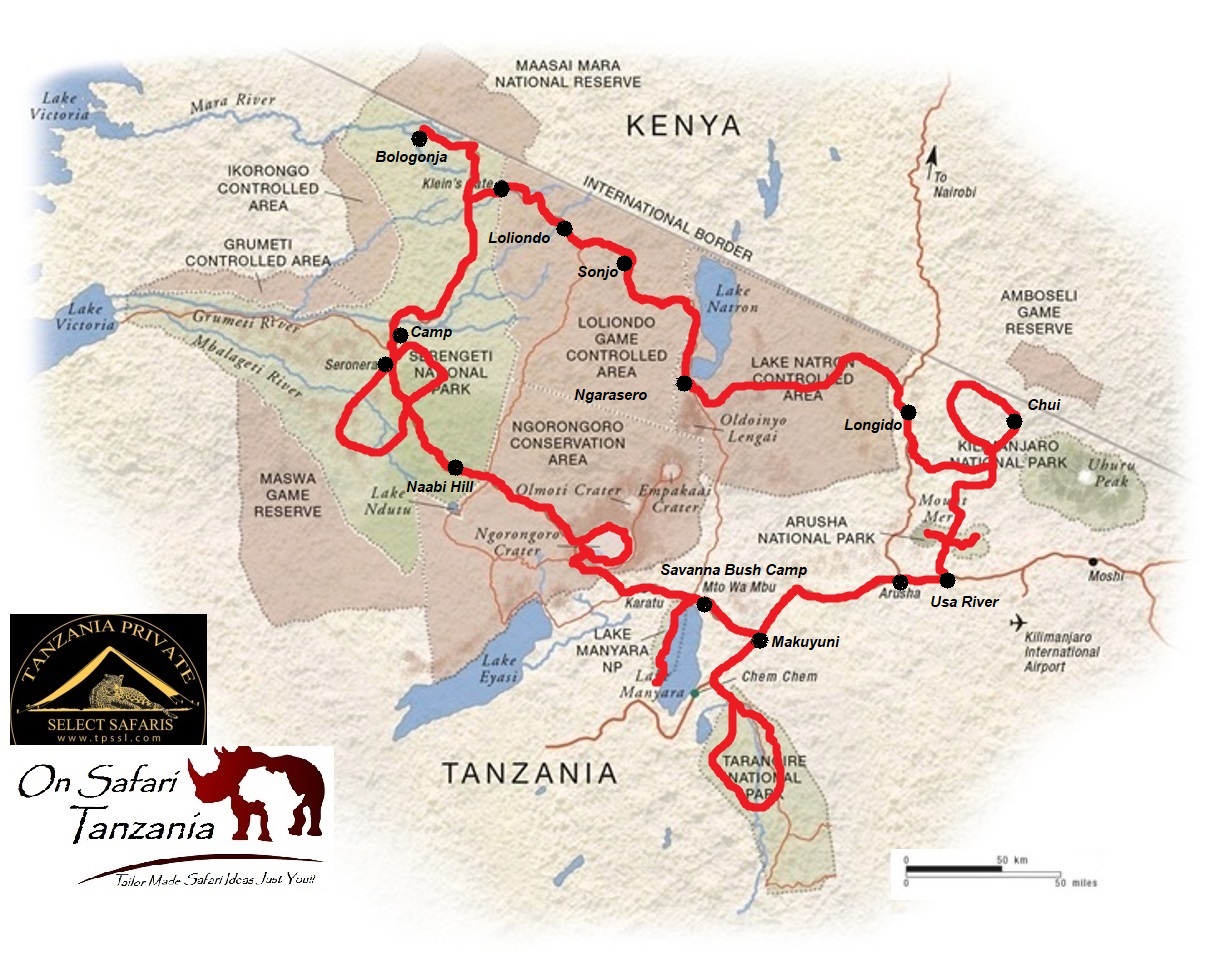 Off the Beaten Track Map